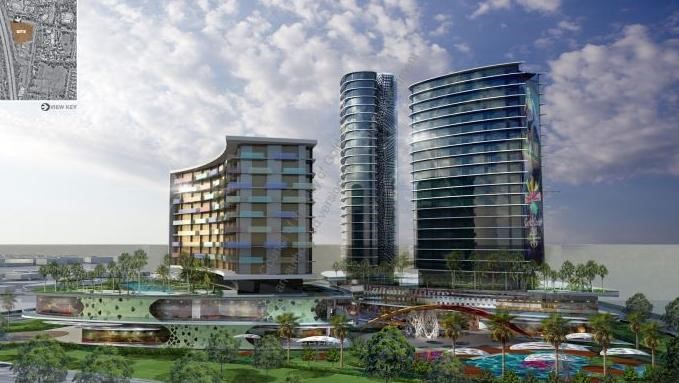 Thongs, T-shirts and board shorts have driven the largest spike in the Gold Coast’s house and unit approvals since height of the global financial crisis.

The city is riding a multi-billion dollar wave of confidence, with 8299 dwellings approved for 2014-15.

That was up 65.5 per cent on the previous year, according to the Australian Bureau of Statistics.

Of these, around 55 per cent were units, with the rest houses, primarily in the city’s north.

Gold Coast Development approvals, including those of the Ralan Group’s Ruby and Sapphire, are at their highest since the financial crisis.

It is the largest single jump in approvals in nearly a decade and comes as the city’s population increased by more than 9000 last year.

Council planning boss Cameron Caldwell said prospective developers had confidence in the Gold Coast and the population boom came from an increasing desire to indulge in the Glitter Strip lifestyle.

“The Gold Coast presents a wonderful lifestyle opportunity for a range of people, including young families and retirees and many of these projects are catering to that,” he said.

Among the major projects approved by the Gold Coast City Council in the past year were early stages of the Ralan Group’s $2 billion Ruby and Sapphire developments, which will ultimately include six towers and more than 2600 units.

An artist impression of the Sapphire development.

While industry figures admit many projects will not be built, the number of applications reflects increasing confidence in the city’s economy.

Properties with active development applications reach a higher price on the market.

Figures compiled at the end of the 2015-16 financial year showed there were 87 material change of use applications in Southport, including several towers taking in hundreds of units.

Among them were the ASF Consortium’s two-tower project, The AU, and a 24-storey building earmarked for the site of the former Sundale Motel.

“We know that rental vacancies are just 1.1 per cent at the moment, so of course there is opportunity to put more buildings in the market and there are people playing with their Gold Coast development to get approvals,” he said.

“Some of these are reworked from previous projects but under the SEQ regional plan there will be no more greenfield expansion on the Gold Coast, so what we have is what we have got.

“The Gold Coast is coming of age and ending up similar to Sydney, with increased urbanisation which we are seeing through the number of unit approvals to get more people in.”

Hinterland suburb Tallai unexpectedly recorded 55 MCU applications in 2014-15, along with the rapidly expanding northern suburbs of Pimpama and Coomera.

Pimpama in the city’s north is the center of a large number of applications. Picture: Supplied

Cr Caldwell said the booming numbers represented construction across the Coast, from the northern growth corridor to the southern border and west to the Hinterland.

“These figures are indicative of the renewed confidence in the market and the feeling within the Gold Coast development industry is that the fundamentals of the economy are strong,” he said.

“Indications are that there will be continued strong investment in the construction industries.

“These figures reflect high levels of activity in detached dwelling product in the city’s north, as well as infill development in, and around, the light rail corridor.”

While the Gold Coast is flying, other parts of Queensland are not doing as well.

Approvals on the Sunshine Coast increased by almost 25 per cent but greater Brisbane, taking in Logan and Redland, was down 26 per cent in June and 1 per cent for the year.

Paul Bidwell of Master Builders Qld is overjoyed at the number of approvals. Photographer: Liam Kidston.

“The Gold Coast is the state’s standout and while one swallow doesn’t make a summer, figures for years like this show when you are on the increase or on the decline and these are great numbers,” he said.

“These figures also indicate there will be plenty of work coming in for those in the construction industry.”

Gold Coast land prices could jump to half a million!!