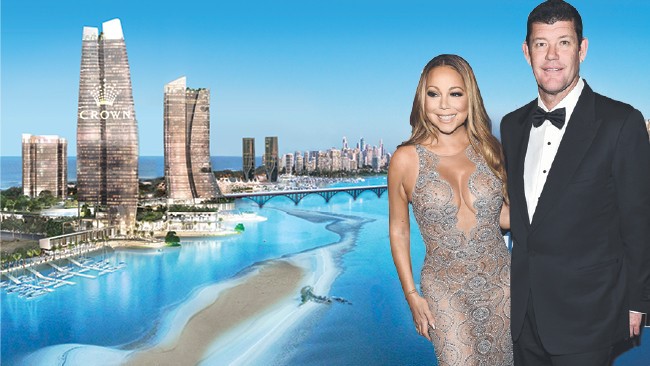 WORK will begin as early as next March on a $3 billion casino and residential project earmarked for The Spit on the Gold Coast.

James Packer’s Crown Resorts will operate the casino and the Chinese-owned ASF Consortium will build the residential and office space in a game-changing development for the Glitter Strip.

The project will be situated between Palazzo Versace and Sea World resort and includes three towers, seven high-end restaurants and a spectacular Florida Keys-style bridge which would link The Spit to Southport to ease traffic congestion.

Sea World would also double in size, add a water park and become the biggest theme park in the country.

Premier Annastacia Palaszczuk, Infrastructure and Planning Minister Jackie Trad and State Development Minister Anthony Lynham signed off on a process deed with ASF bosses this week and the master plan is expected to be given the green light by Cabinet before Christmas.

The development would be one of the biggest and most expensive in Queensland history, even as work starts on the $3 billion Queens Wharf integrated resort in the heart of Brisbane that is being developed by Star Entertainment.

The bold plan by Crown and ASF to make a major statement on the Gold Coast landscape could also see Star press the accelerator on the next phase of their expansion plans for Jupiters casino at Broadbeach.

The development would be situated between Palazzo Versace and Sea World resort. Pic: Mike Batterham

ASF had previously lobbied to build a cruise ship terminal and casino/resort on the Southport Broadwater, but that proposal was shot down in flames by environmentalists and the State Government.

However, green groups are expected to give this latest project the all-clear because it does not include a cruise ship terminal or involve touching Wave Break Island.

ASF director Louis Chien said the rejection of the cruise ship project had not weakened the company’s resolve.

“We continue to believe in Queensland and in the Gold Coast,” he said.

“It’s been a long journey but it has allowed us to ensure that what we deliver is going to be something truly iconic.

“It will help raise the profile and the brand of southeast Queensland.”

It is understood ASF and Crown have been in talks for months about Crown operating the casino and hotels.

No formal agreement has been signed, but The Sunday Mail understands Crown is keen to proceed as long as the ASF master plan meets stringent quality standards.

ASF and Crown have also been in talks with Sea World and are close to an agreement on working together to expand the theme park’s footprint.

One of the major issues is traffic, and a bridge linking The Spit to Southport is the most likely option.

The ASF project could see Star fast-track plans for a “mini-Manhattan” of up to seven high-rise towers on their Broadbeach island, but Mr Chien said he was not concerned by his rivals’ plans. “We believe in the spirit of competition,” he said. “It raises the level for everyone.”

The ASF development would be a magnet for well-heeled Asian tourists.