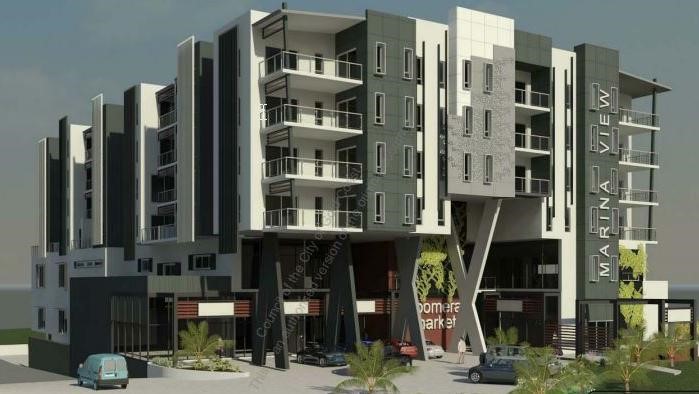 COOMERA’S billion dollar boom is finally under way to create the area’s town centre as developers flock to the growth corridor.

Ground works have begun on the Foxwell Road site which will become home to the northern Gold Coast’s biggest shopping complex and the heart of the new central business district.

The Gold Coast Bulletin’s Andrew Potts reports that more building is on its way as developers plan to bring small towers to the city’s last major greenfield sites.

The latest new project planned for the area is a six-storey mixed use mid-rise planned for a 1.7ha Foxwell Road site just two kilometres from the town centre.

The Marina View building, put forward by developer Foxwell Road Centre, will feature a ground-level shopping centre, a floor of offices in its podium and four levels of units.

In its pitch to the council, the developers say the projects is of the right density to house the number of people expected to move into the area as its development continues.

Marina View will be close to Coomera Town Centre.

City and business leaders say Coomera is on the precipice of a major change as billions of dollars worth of projects are unlocked. City planning boss Cameron Caldwell said the town centre and latest tower were just the beginning.

“Coomera is on the cusp of the planning dream becoming a reality,” he said.

“Westfield has got earth moving equipment going at the town centre and this is now providing confidence to the residents and investors in Coomera.

“Our residents are going to be just one train station away from the light rail by the end of this year and we will continue to see growth in the lead up to the Commonwealth Games and beyond.”

It comes as developer Stockland prepares for the first land release at its $180 million, 116ha waterside project at Coomera.

This project is one of several high-density projects planned for Coomera. The Foreshore Coomera residential development will be between the Coomera River and Oakey Creek and includes 750 homes along 2.5 kilometres of river frontage.

Gold Coast North Chamber of Commerce president Gary Mays said Coomera was “on the up and up”. “Right now the biggest issue facing the area is the need for Foxwell Road but that is happening this year which is great,” he said.

‘There is a real sense of optimism here in the north and we are seeing a lot of activity, including at the Commonwealth Games sports complex.”

Mr Mays said he looked forward to the Town centre taking shape over the next year.

The massive centre promises to create 1200 jobs during construction and 1600 permanent positions once it opens.

The 61,000sq m, $500 million first stage will feature cinemas, offices and a nightclub

The Coomera Town Centre is certainly starting to take shape. If you would like to find out more about buying a home or investment property in the heart of the Northern Gold coast’s new CBD and retail hub, contact us today, we have a range of house and land packages now available.