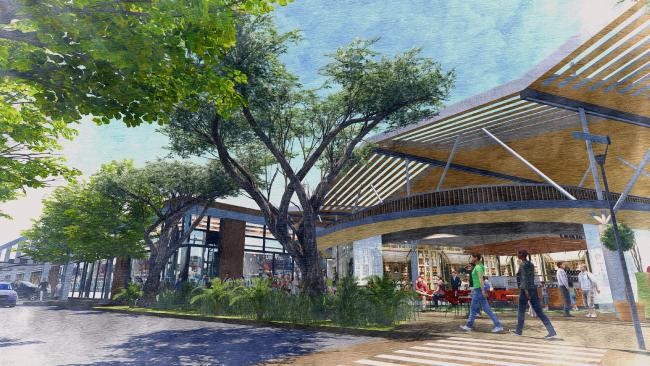 Thousands of jobs and hundreds of new shops will be created as the city’s north is transformed from farmland into a $2 billion retail mecca. At least six major shopping centres are expected to be built in this fast growing northern corridor within the next two years. It will bring large supermarkets, takeaway shops and retail complexes. The $1 billion Coomera Town Centre, is already under construction on Foxwell Rd, while Pimpama City and Hope Island Town Centre are both scheduled to break ground.

An artist’s impression of the Coomera Town Centre.

City leaders say multiple centres will bring thousands of jobs to the northern suburbs, during construction and in the later operational phase. The Coomera Town Centre alone promises to create 1200 jobs during construction and 1600 permanent positions once it opens. The first to finish will be the Pimpama Pit Stop on Jacob’s Well road which is expected to be completed later this year before work begins on the Pimpama City centre. It will feature a petrol station, car/dog wash, and food outlets including Hungry Jacks, Zarraffas and Subway.

City planning boss Cameron Caldwell, whose division includes much of the northern growth corridor, said infrastructure such as shops are being built to match the growth in the area’s population. “For many years we have seen an influx of population to the area without the usual services built to support the growth,” he said. “The recent addition of shopping centres has brought a better balance and now these applications provide opportunity for both shopping and employment closer to people’s homes. “The increase in commercial development shows confidence in the retail sector.”

Pimpama City is set to open in late 2018 and will include two supermarkets, about 26 speciality shops and a tavern. Two other major supermarkets are planned for Ormeau’s Eggersdorf Rd and Uppera Coomera’s Brygon Creek Drive. However, Gold Coast North Chamber of Commerce president Gary Mays warned the rapid increase in retail offerings had the potential to saturate the market. “We do not want to see the market flooded because the smaller ones could be hit hard once Coomera Town Centre opens,” he said.
The $500 million first stage of the town centre is expected to be around 61,000sq m, with the centre to eventually include a cinema, offices and a nightclub, a multilevel department store, a dining precinct, an outdoor beach and multiple commercial retail spaces. The two stages will cover around 83,000sq m.

Developer: Woolworths
Value: More than $1 million
Construction begins 2018, due for opening in December 2019
Will include: A supermarket, plus at least five retail outlets.

The North’s traffic.
Motorists in the booming northern suburbs are not expected to encounter the grid lock traffic elsewhere on the Gold Coast because of proper foresight, an academic says.
Griffith University traffic and urban design expert Matthew Burke said planning for road infrastructure around major shopping centres was essential and, around the major
developments planned for the city’s northern corridor, had been properly considered. “Big shopping centres require significant infrastructure and place huge demand on the road network so these need to be planned really well.

“If the traffic sequence is wrong, if the driveways are in the wrong place, you can create great problems and prevent free flowing traffic. “However, we have seen significant long term planning for new infrastructure in the city’s north and this has filtered down to neighbourhood planning.”

Dr Burke said the road network in the city’s north was well setup for the increasing development in the area.“We are never going to be in the situation where we have dramatic open roads with empty space at peak hour but we are keeping up with the demand in terms of infrastructure in the area,” he said.Gold Coast City Council said the lion’s share of its $100 million plus pend on road upgrades in this year’s budget would be used on key arterial roads around major developments in the northern suburbs. Foxwell Road, where the $1 billion Coomera Town Centre development is under construction, will be widened.

Deputy Mayor and Pimpama Councillor Donna Gates. Photo: Jerad Williams Deputy Mayor and Pimpama Councillor Donna Gates said roads would be upgraded to take in the development boom in the area, taking pressure off the existing East West traffic. “Every approval is considered by either the council’s traffic planners or the Department of
Transport and Main Roads in terms of the added impact on the road networks,” she said. Key business groups such as the Gold Coast North Chamber of Commerce have lobbied for improved funding to road upgrades in the fast growing northern corridor.