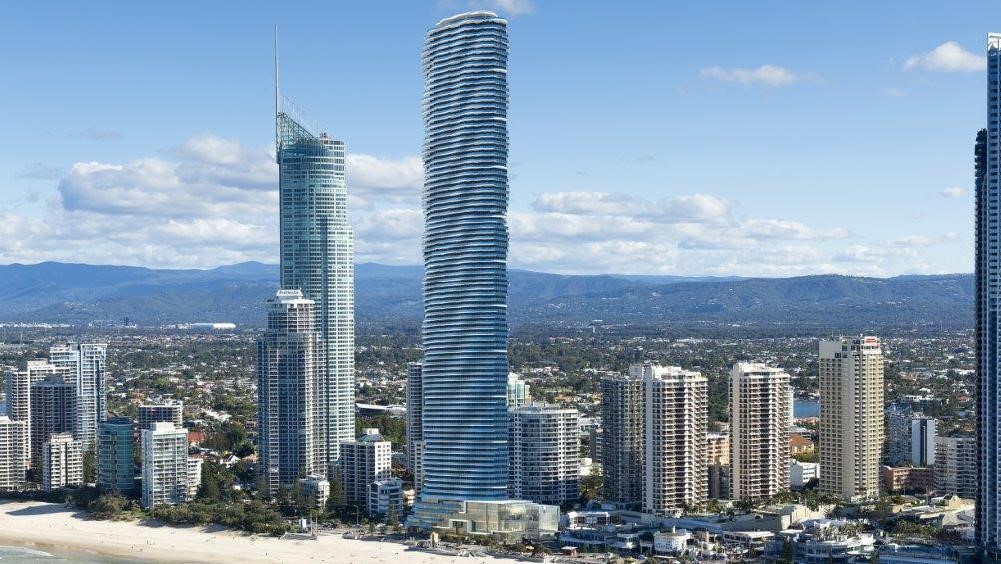 SEVEN super towers, more than 6000 new units, an extended tram network and a thriving street scene. Welcome to the Gold Coast of 2020.

Around $8 billion of development across more than 30 projects is currently on the council’s books, with experts tipping the Gold Coast will boast a vibrancy rivalling London and New York in the years following the 2018 Commonwealth Games.

Around $4 billion, or half of this, is already under construction between Southport and Mermaid Beach, including the $1.1 billion Jewel, $1.1 billion Spirit, the $870 million first stage of Jupiters Casino’s expansion and the first of the four-tower, $1 billion Ruby.

All are due for completion by 2020 with more, including Sunland’s controversial $600 million The Mariner, up for ­approval or preparing for ­construction.

TIP OF THE ICEBERG

And this could be just the tip of the iceberg, with one of the city’s most experienced developers predicting a boom in development of land-banked properties held by overseas ­investors.

Council planning boss Cameron Caldwell said the Gold Coast was in the process of maturing and would reach a critical point in the years following the Games.

“Right now the economy is still in a recovery period after the (2008-09) financial crisis but the cautious optimism we are seeing now will have gained momentum by 2020 as we see more high-rises being added to the iconic skyline,” he said.

Councillor Cameron Caldwell says the Gold Coast is on the cusp of becoming a “mature city with a more robust economy”. Photo: Jerad Williams

“In the past year we have seen renewed interest in mega tower developments which, for the most part, have not been on the agenda for almost a decade.

“In 2020 there will have been a renewal of the skyline that will enhance it and following the Games we will see a mature city with a more robust economy.”

The majority of tower projects either proposed or under construction feature a mixture of residential offerings and high-end product designed to appeal to visitors from the Asian tourism market.

The Surfers Paradise skyline — City leaders say it will be refreshed by 2020. A real Gold Coast 2020 vision.

According to Gold Coast Tourism figures, 269,000 Chinese visitors came to the city last year, around 28 per cent of total international visitors and up from 24 per cent the previous year.

But it’s not just tourists — the spike in high-density developments along the coastal zone is also targeted towards the thousands of southern state residents moving to the Glitter Strip.

Leading demographer and futurist Bernard Salt’s 2015 Future Gold Coast: Beyond the Horizon report shows the Gold Coast’s population growth would occur steadily at a rate of more than 14,000 annually.

“The tram line will drive pedestrian and small business on the streets and it, along with the Games, will have been agents for change,” he said.

“You will see more people walking past and using small businesses on a human scale which goes in conjunction with good architecture and high-rise living.”

Architect and UDIA Gold Coast boss Finn Jones said the Coast of 2020 would be a fusion of New York and London.

He said a vibrant cafe and small business culture was already beginning to appear around the tramline which would play a role in creating “a unique experience of wonderfully expressive skyline and more intense street life”.

“The one thing we can count on to be different in that year is that there will be much more infill development and the city will be more alive at the street level,” he said.

“The strip will start to become more of a pedestrian zone and you will start to see more activity going on, something which is already occurring, but we are maturing in different ways.

“The skyline will remain unique but … we will start to look like others in that we will have a more intense skyline but a more vibrant life on the ground, similar to New York and London.”

Traffic congestion in and around Chevron Island.

Many recent developments have been greeted with concern from residents over the potential impact on traffic and change to the surrounding amenity.

But one of the city’s most experienced developers said not all the proposed projects would ultimately be built.

Con Nikiforides, the man behind the Niecon Plaza and Oracle, has been developing on the Coast for nearly 40 years said he expected a continued strong Chinese influence on the market.

“Depending on the Federal Government’s fiscal policy of the day I think the Chinese will continue their influence on the market, even though right now there is encouragement against lending to foreign investors,” he said.

Leading Broadbeach developer Con Nikiforides, pictured at his Oracle towers, says the only way for the Gold Coast is “up” .

“This is slowing the number of Chinese developers and right now they are land ­banking. Depending on the circumstances and timing, things could change significantly by 2020.”

Mr Nikiforides said the broadening economy and increasing focus on technology and education meant the “only way for the Coast to go is up”.

The Gold Coast Light Rail will be on its way to the airport by 2020 … or so city leaders hope. Picture Mike Batterham

By 2020, the light rail’s second stage will have been running to Helensvale for two years, with city hall expecting a proposed third stage to Coolangatta will be under construction.

This drive south, along with the City Plan allowing for high-density development surrounding the tram route, has developers eyeing off sites.

Ralan Group boss William O’Dwyer is the city’s largest single private landholder on the coastal strip and is the man behind Ruby and Sapphire.

He said the boom of today was just the beginning.

“This journey of ours is a compelling story,” he said.