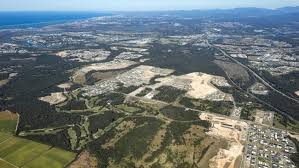 It has been declared the nation’s fastest growing housing market based on its performance during 2015/16.

In second place was Sydney’s Cobbitty-Leppington area, followed by Palmerston-South in the Northern Territory.

HIA economist Shane Garrett said the report showed residential building activity in Queensland was spread out across the state, rather than just within Brisbane.

Of the 20 Queensland suburbs that made the overall national list of hot spots, five of them were on the Gold Coast, including Coomera, Hope Island, Upper Coomera, Willowvale and Surfers Paradise.

“It’s possible strong performers like the Gold Coast were partly helped by the fact that there’s been a lot of downsizing going on by people in Sydney and Melbourne, who are moving to this area of Queensland,” he said.

Pimpama, sitting in the South East Queensland growth corridor halfway between Brisbane and Surfers Paradise, saw its population grow at a rate of 35 per cent during 2015/16.

“What propelled them so high was the population growth. An increase of one third in the course of a year is very unusual.

“It would reflect the fact newly developed homes and units in that part of town have become occupied by new residents.”

Mr Garret said it was good to see the report showed strong growth in regional areas, not just capital cities, as 2016 represented a record year for new home building activity in Australia, supporting economic activity across the country.

“Today’s report identifies 86 separate areas in every state and territory across Australia where residential building activity is acting as the engine of economic activity, employment and development,” he said.

An area qualifies as a hot spot in the report if its population grew by more than 1.4 per cent national average during 2015/16 and at least $150 million worth of residential building was approved during the year.

Why Queensland is attracting investors over New South Wales.